Jack Terry's maternal grandfather was a rancher and a cowboy who rode on some of the last great cattle drives out West. His paternal grandmother was a painter who vividly captured the people and landmarks of Texas. From his earliest childhood days, Jack Terry found himself immersed in the worlds of both cowboys and canvases. And from the age of three, he worked to perfect the talent that has made him one of America's most honored Western artists.

Young Jack was just a toddler when he began drawing side-by-side with his grandmother while she painted. By the time he was nine, he had developed his own special style. 'I did a still life of an old cow skull, a boot of my grandfather's, and a Mexican serape, and entered it in the Scurry County Fair. I won a blue ribbon on it! 'That became the first of more than 130 awards Jack Terry won by the age of 16 for his still lifes, landscapes and Western art.

Meanwhile Terry spent time with the ranchers and cowboys from his grandfather's world, a habit he kept up throughout his formative years. Even after graduating from the University of Texas in Austin, he took every opportunity to do day-work on various ranches in search of inspiration and new subject matter. While in college, Terry majored in journalism and minored in art. By the time he earned his degree, he already had paintings displayed in galleries throughout Texas.

Austin was quite the Western art center in the early 1970s, and Terry took full advantage of the opportunity to work with the great painters who spent time there. He credits Melvin Warren with helping him to perfect his understanding of both human and equine anatomy, and James Boren with assistance on perspective. Porfirio Salinas and Dalhart Windberg taught Terry about landscape painting, while Edouard Cortes fascinated the young artist with his methods of capturing light on canvas. Says Terry of his association with Cortes, 'He painted Paris street scenes and I learned a great deal from his work. In fact, we showed in the same gallery in Austin. I've always been fascinated by the French use of light, reflection and shadow, which has influenced even my western art and techniques.

Terry's big break came at age 26 when he was named bicentennial Artist in Texas. That led to a one-man exhibit in the Texas Rotunda, and a commission to paint the late President Lyndon B. Johnson for publication on the Texas Bicentennial Calendar. In 1976, Terry opened the Cotten-Terry Gallery in Austin, which he ran until 1979. By that time, oilmen were short on money, and Terry's cowboy paintings had become more difficult to sell. Ever resourceful, he drew upon his own observations and his eclectic training to add Victorian women subjects to his collection. They sold to a whole new audience of admirers, and soon Terry was back on top. Today his repertoire includes both the Western and cowboy art for which he's best known, as well as landscapes, Victorian images and street scenes. 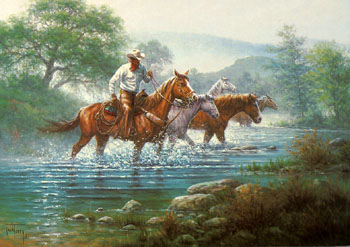